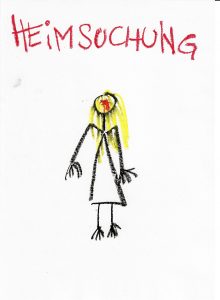 Logline
When an alcoholic mother has to return to her rural home town she uses the opportunity to rebond with her 8 year old daughter. Their troubled relationship takes a turn for the worse when a deep trauma resurfaces in the shape of a terrifying entity.

The Visiting – A mother’s fight against her demons.

When Adam, a narcissist, meets the very down-to-earth Esra, he tries to impress and conquer her. The story of a shallow man who’s forced to face his inner self.

The full short film on Vimeo:

In Fabruary 2012 director Achmed Abdel-Salam travels to Egypt with his father, who was born and spent half of his life there. One year after the president’s downfall the aftereffects of the revolution are still very noticeable throughout the country. The filmmaker uses this scenario to reflect on identity and the shortcomings of language. The camera is glancing at faces that tell stories of their own, or catching glimpses of moments which could easily serve as miniatures of a broken system. In its narrative center, however, the film deals with a father-son relationship and the wish for finding ways of communicating with one another.

A young couple. An argument. A conciliation and shared moments of silence.

A film about intimacy and the limits of verbalizing emotions.

The Concept:
Shot without a script in only one day. The director felt that his involvment as an actor, being able to direct the scene from within, and using private video footage of himself would add to the feeling of intimacy.

JAN, 41 years old, wears an electronic tag. More than 6 months he spent in prison. Now he’s serving a period of home detention under electronic monitoring. Before that he was a teacher. Today he works as a mechanic in his father’s garage.
One day he meets 16-year-old INA, who lives in the same apartment building with her exhausted mother.

At night-time a woman and her little son rush into a self-service laundry. A bloody shirt has to be cleaned. While the seemingly traumatized mother is busy trying to calm down, the boy starts talking to the only other customer – an insomniac man. Their casual chat takes a turn, when the boy asks him the same question his mother already couldn’t answer: “What’s it like being dead?”

A young woman flees from her violent partner. But running is not enough.